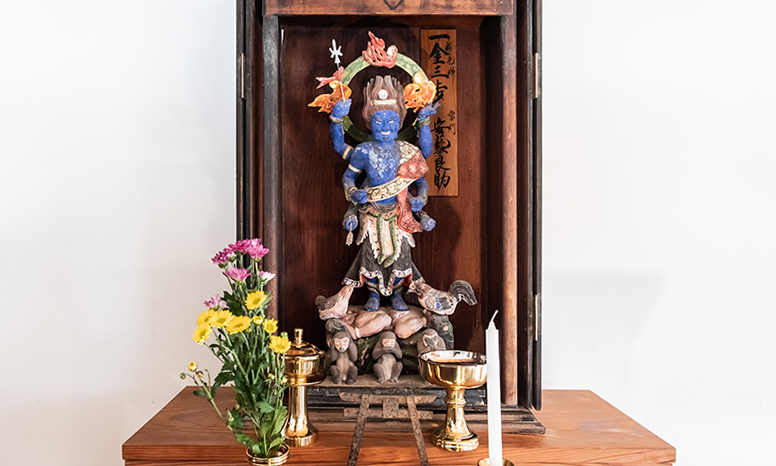 The wooden statue of Shomen-kongo was said to be donated by a person from Tanba (a former province which extended between present-day central Kyoto and eastern Hyogo prefecture) in 1812. This is written on the Zushi (a miniature shrine with double doors) for the statue.
And also, according to the explanation, the statue was colored with the help of an offering from the local village chief in 1869.
Shomen-kongo is also called “Shoshiki-daikongoyasha-jin,” and used to be a deity who took human energy, ate human flesh and blood, and spread a horrible plague.
However, this deity surrendered to Taigen Myo-o (Atavaka) and turned into a good deity.
Shomen-kongo conversely gained the ability to revoke its former calamities by mastering his incantation.
Among the spread of Buddhist belief in Koshin, this deity’s blessing is considered to grant one longevity, avoiding an early death.
This origin is from a theory of the Three Worms (or Three Corpses)* in Taoism.

*Koshin-shinko (belief in Koshin) originated from a theory of the “Three Worms (or Three Corpses)” in Taoism introduced from China.
This belief is very complex and considered as the mixture of various religions and customs, such as Buddhism (especially esoteric Buddhism), Shinto, Shugendo (Japanese mountain asceticism incorporating Shinto and Buddhist concepts), supernatural medical science, folk traditions, and so on.
Regarding the theory, it is considered that three worms inhabit a human’s body.
On the eve of the 57th day of the sexagenary cycle (a 60-year cycle in the Chinese Zodiac), these three worms exit the body during one’s sleep, and ascend to heaven to report on one's wrongdoings.
It is believed that this will shorten the host’s life, therefore, a custom started in which people gathered to stay up all night and pray to the deities on that day.