The Thirty-three Kannon Statues in the corridor 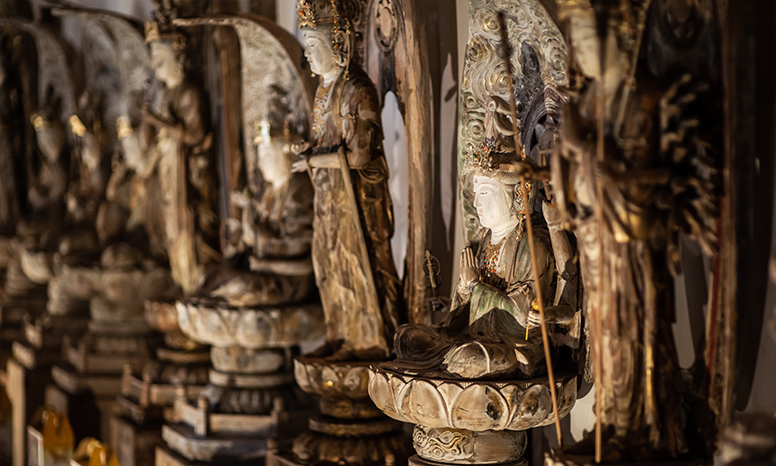 33 Statues of Kannon（a deity of mercy）are placed along almost the whole length of the corridor which connects Dainichi-do Hall and Daishi-do Hall.
These statues are associated with the Saigoku Sanjusankasho Kannon Temples（33 Kannon Temples in western Japan）,* however, some statues have styles which differ from the originals.
According to our temple's tradition, these statues were donated by Sosuke Matsuura, who was from the Fukushima district in Osaka, as well as some other people during the Meiwa Period（1764-1772）.
There is an inscription on the pedestal of the 27th statue of Shosha-ji Temple（present Enkyo-ji Temple with a Mountain Name of Shosha-zan）which says that this statue was built using an offering from a man known as Mr. Tsuboi in April of 1790.
The donors of these statues are not only local（from around this temple）but also from various places in western Japan. We can see that there were offerings from present-day Nagasaki, Kochi, Osaka, and Kagawa prefectures, not just Tokushima prefecture.
However, one characteristic of the offerings is that they are not given by some kind of religious associations but only by families instead.
It seems that each statue has had repairs in the past, but we gave all 33 statues a restoration as a part of our large-scale renovation during the Heisei period（The work started on November 17, 2014 and was completed on December 31, 2018）.

*The Saigoku Sanjusankasho Kannon Temples are 33 temples that enshrine Kannon in Wakayama, Osaka, Hyogo, Kyoto, Nara, Shiga, and Gifu prefectures. People make pilgrimages to these temples, and this is considered as the oldest Kannon pilgrimage in Japan.